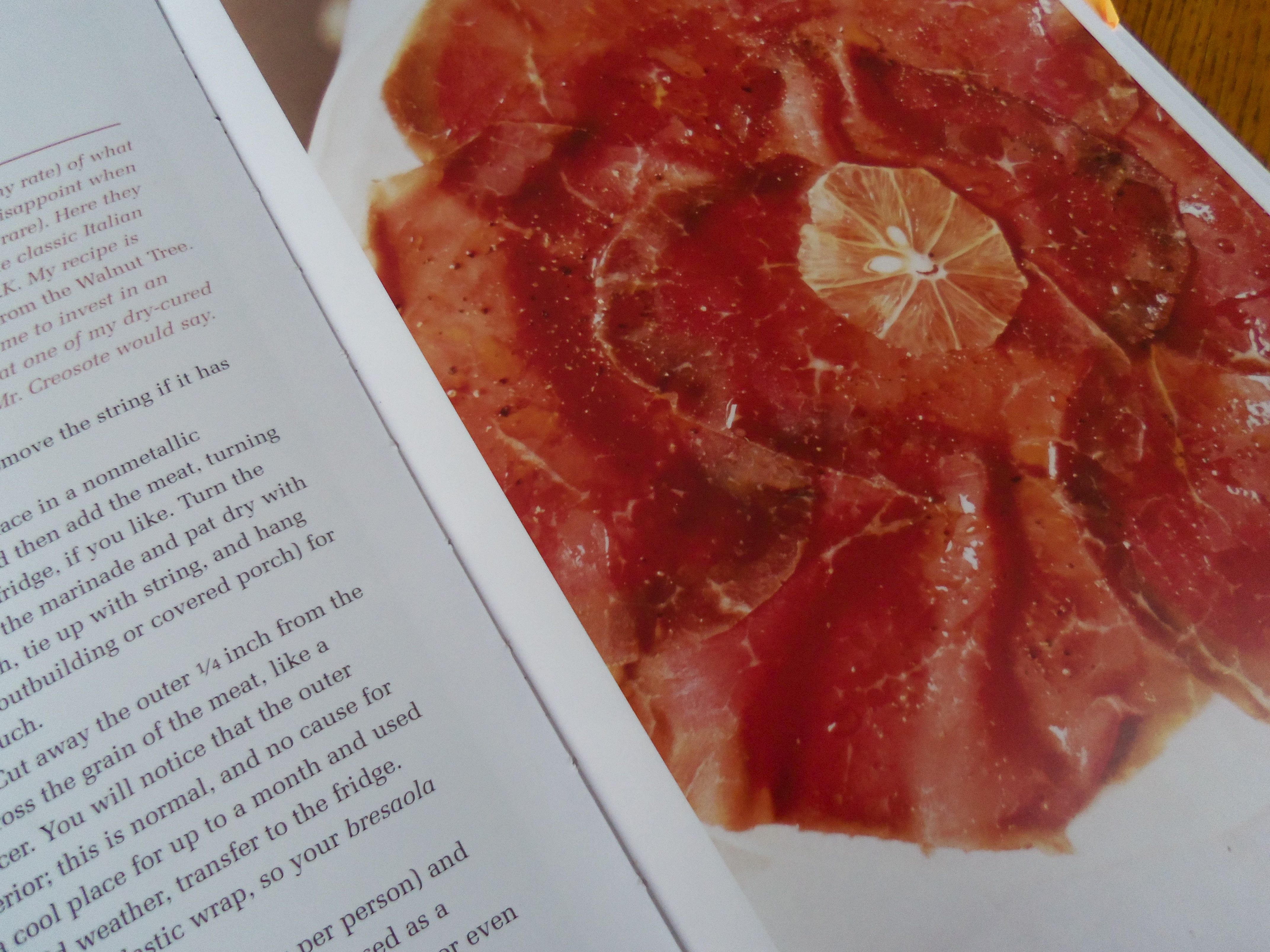 Remember the huge crush I have on Paul Bertolli? And his tomatoes 12 ways project? And my idea to copy his idea using beef instead of tomatoes?

You thought I forgot about it didn’t you?  Well, I admit I’ve been slow to come up with a new way, but not to worry; I’m on it now.  And I’m especially excited about this one.

Everyone loves prosciutto, the paper-thin, silky, salty, air-cured ham from Italy.  But prosciutto’s less known beef cousin bresaola can be just as amazing.

Of course, leave it to our Italian friends to turn thinly sliced air-cured beef drizzled with olive oil & lemon juice into an art form while our American version of dried beef is known by millions of GIs as the main ingredient in a dish called Shit on a Shingle. What can I say? It doesn’t have to be that way…

Since I’m out of everything but burger at the moment, my eye of round is from Ron Gargasz Organic Farms just outside Slippery Rock, PA.  Now, don’t tell the Ladies I said this, and if you do I’ll never admit it, but the Angus cows at Ron Gargasz’s farm are pretty amazing too. They’ve never eaten anything but organic grass and hay grown right there at home and lead companionable, social lives. With plenty of doting too…

So, with a beautiful, grass-fed organic eye of round in my freezer, I’m not about to waste a chance to take an imaginary road trip to Italy.

The esteemed panel of experts on my bookshelf  had much to say about making Bresaola.  Sadly, just like he did when I made consommé, Paul Bertolli left me to fend for myself.  But Darina Allen, Hugh Fearnley-Whittingstall, Josh and Jessica Applestone and Michael Ruhlman; they all had lots of good advice.

All four books have great recipes and a slightly different take on making bresaola.  I had a hard time making up my mind which one to follow, but ended up with Hugh Fearnley-Whittingstall.  My super-close second was the Applestone’s recipe which was the only one to call for cold smoking the roast before air drying. Very intriguing and I will be trying it soon.

Why was I so taken with HFW’s recipe? The brine was a little more elaborate, without being ridiculous. I always hate to over season well-raised beef because I think it tastes so great as it is.  But the small amount of lemon zest, orange zest, bay leaves, black pepper and red pepper flakes in the wine & salt brine seemed like just the right blend to really call attention to the beef.  You may not agree, but I think there’s something magic about the combo of beef and orange zest… add red pepper flakes and oh, my.

So this week, I mixed up my brine and soaked that roast turning twice a day. Tomorrow begins the tricky air-drying process which will last three to four weeks. Then, if I don’t blow it, comes the best part of all, eating the bresaola!

Very exciting stuff for me. I know.  I know.  I  SHOULD get out more.

If you missed my other beefy adventures,  here they are: